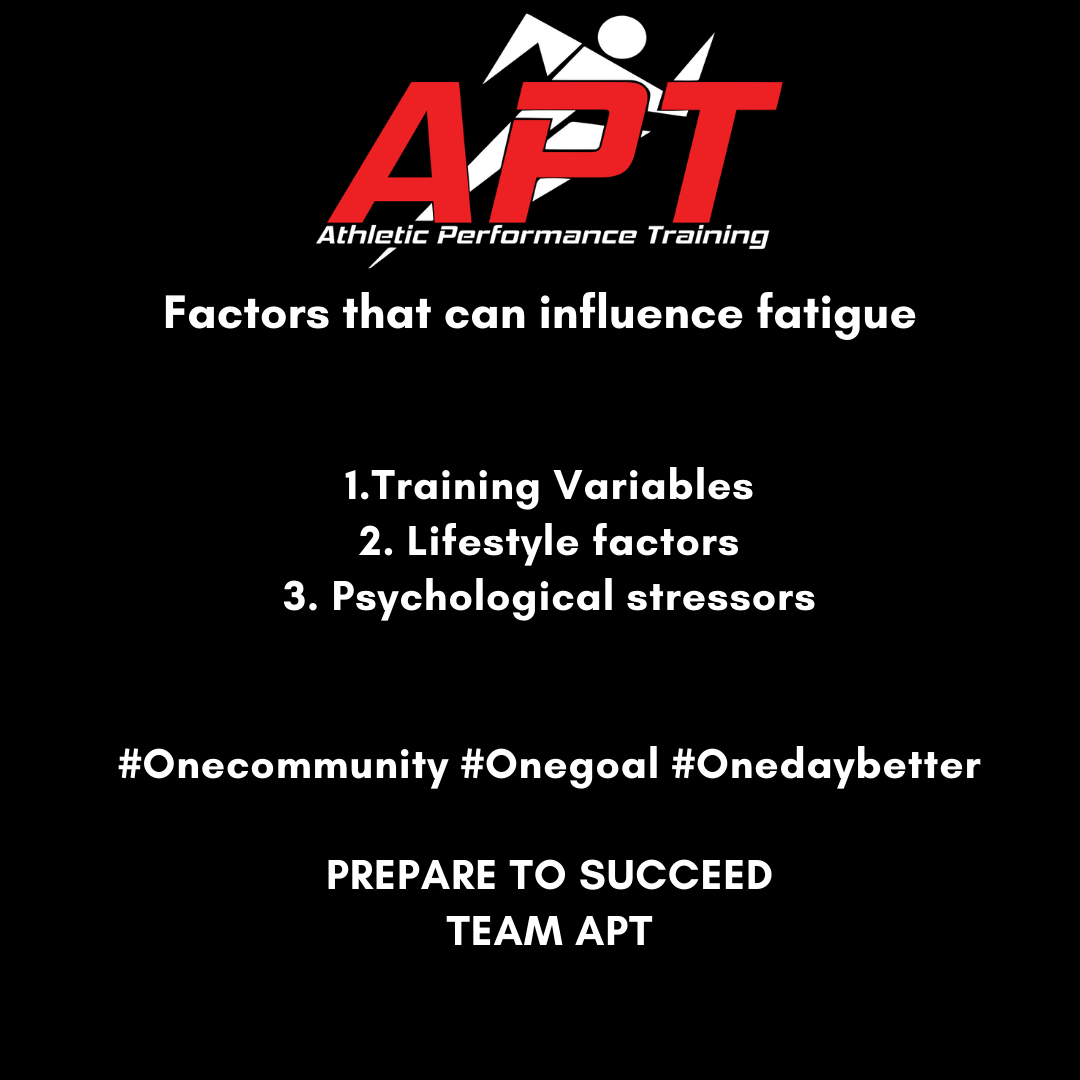 Factors that can influence fatigue

In sport/competition, a common thought process is that athletes have to push to the brink of exhaustion, and then some more, in order to rise to the top. Youth athletes and new trainees adopt a mindset that they need to outwork the opposition, and may end up digging themselves into a hole that takes years to get out of. The reasons they adopt this mindset can come from a variety of environments they were exposed to; one possibility being a youth coach that put too much emphasis on winning or losing, or pushed too hard in practice. Or perhaps they were inspired by their favorite athletes growing up. The late Kobe Bryant, who was known for his relentless work ethic and “mamba mentality” inspired millions. As a coach, I’d actually prefer to have an athlete come in with this mindset and have to reel them back rather than constantly try to motivate someone to do more. The reason I bring this up is not to knock this mindset, but rather to open the door on what these athletes can do in order to recover when they aren’t pushing the limit.

To introduce the logic on why athletes need to recover, we’ll refer to the Fitness-Fatigue Theory. Very simply put, as an athlete practices their sport or trains in the gym their fitness capabilities increase. Concurrently, their fatigue also rises during these sessions. As time goes on with these activities, fatigue begins to accumulate and the athletes ability to perform can drop off. Fatigue here can be defined as either physical or mental disruptions that lead to a performance decrement. And because we never want an athlete's performance to decrease, it’s important to introduce some recovery strategies during those periods to keep the athlete feeling fresh and ready to go.

Before jumping into the recovery strategies, below I listed the factors that can influence fatigue:

Training Variables: Training volume (how much work you do), training intensity (how much weight you move), rest periods between sets and sessions, and the amount of training sessions you perform in a week can all influence fatigue.

To give a few examples, if you jump 20lbs on trap bar deadlifts compared to the previous week, your system has to push harder. If you have to change your schedule for the week, and instead of lifting Mon/Wed/Fri you have to perform three straight days on Tues/Wed/Thurs you will feel less recovered between sessions.

Lifestyle Factors: Did you sleep an appropriate amount the past couple of nights? [We won’t dive into sleep too much here because it was discussed in a previous blog; but let’s put forth an example and say you sleep 5 hours a night for two nights, then sleep 8 hours the third night before your scheduled training day, you’ll still feel like crap.] Did you consume enough calories to fuel the work you need to do? Do you work a very demanding job? Someone who spends the entire day as a construction worker is going to carry more day to day fatigue with them compared to a teacher.

Psychological Stressors: Are you generally more stressed throughout the day due to your job? Do you have stressors affecting home life - arguing with significant others, financial problems, etc.

With these variables in mind, the best thing you can do to dismiss fatigue is avoid them as much as possible. No one lives a stress free life, but you can try to mitigate as many areas as possible. If you are a college student studying for a final exam on Friday, it probably makes sense to lower your training load that week and not push for any PR’s. Taxing yourself on the physical and mental side would only put you in the red zone. For a full time employee, try to figure out what days of the week you typically feel the most recovered, and plan out your lifting days accordingly. This is also why training should be easier for athletes in-season. In-season training is a time to maintain what you’ve built, and use training as a means of staying healthy. Trying to push the limits in practice and games five days a week, and then out work everyone in the gym twice on top of that is a recipe for disaster.

At the end of the day, don’t overcomplicate the process. After a workout, go home and have a good meal. Follow that up with an activity that helps you relax, maybe its watching a movie or playing video games for an hour or so. Maybe it’s going on a walk or playing with your dog. Maybe it’s taking a hot shower and reading a book. Spend some time laughing and hanging around with friends or family in a carefree environment. When it comes to making progress you need to push the boundaries in training/practice to improve - but don’t make the mistake in thinking you can do this continuously without letting your body recover.